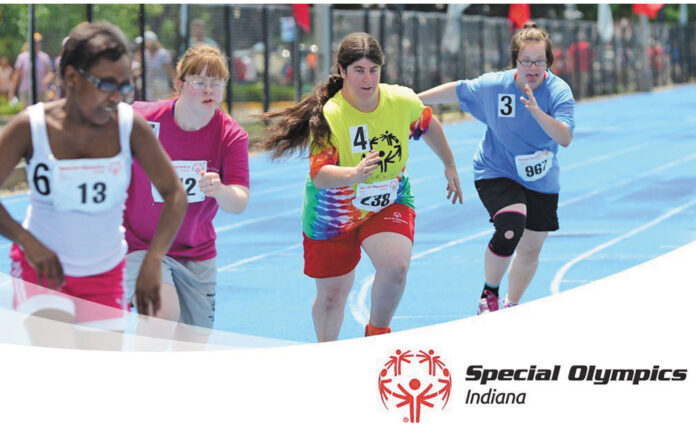 IT’S NO SURPRISE THAT BEING INVOLVED IN group sports helps youth and adults grow and learn new skills. For those with physical and intellectual disabilities, being involved in sports can inspire them to advocate for themselves and give them the skills they need to live more independent lives.

For 51 years, Special Olympics Indiana has been helping athletes — starting at age 8 — learn new sports, make friends and advocate for themselves.

“I got involved in Special Olympics because I went to a basketball practice one time, and I really liked it a lot and I liked meeting new friends from other parts of the state,” Elliot Daniels, 36, said. “I really enjoy Special Olympics ‘cause it helped me grow into a better person.”

Athletes Samantha Holt, 27, and Carlos Crawford, 20, had similar experiences. Holt got involved with Special Olympics by showing up to an event roughly five years ago, and Crawford was brought to a basketball game by his brother, who wanted him to get involved.

Collectively, the three athletes ski, bowl, participate in track and field and play basketball, flag football and corn toss. While they have learned new athletic skills, the social and leadership skills they’ve learned from participating in Special Olympics has been life changing.

While, as CEO Jeff Moehler put it, there isn’t a “retirement age” for Special Olympics, the organization hopes athletes will work their way up the ladder toward leadership positions.

Daniels has already taken a leadership class held at Butler University, where he learned to hold meetings and how committees work.

“Special Olympics has helped me get better on living on my own and taking a bigger responsibility of things that I have to manage and do,” Daniels said.

Even if athletes don’t move on to work as leaders in the organization, Moehler hopes what they take from Special Olympics will help them advocate for themselves in their daily lives.

Oftentimes, those with special needs or disabilities are overlooked, Moehler stressed. Instead of speaking directly to a person living with a disability, a doctor may speak to a caregiver, and patients who are disabled may not ask many questions or complain about side effects of medication, losing autonomy in the process.

Programs, such as ALPs and unified sports — where athletes without disabilities compete with and against athletes with disabilities — are meant to not just teach the love of sports but skills necessary for independence and self-confidence.

“Special Olympics is their organization,” Moehler said of athletes, “It’s not mine, it’s not the volunteers. … Special Olympics uses sports as a catalyst to change their lives forever.”