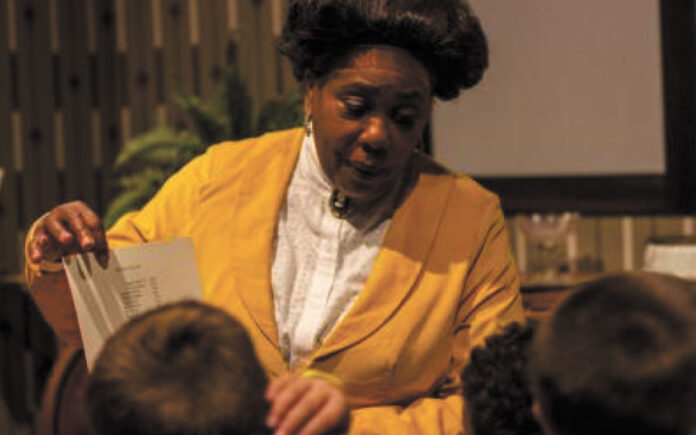 A NEW EXHIBIT FROM THE Indiana Historical Society will take visitors more than 100 years into the past to visit Madam C.J. Walker’s factory, where her company produced hair care products that eventually made Walker the first American woman to become a self-made millionaire.

Jo Bennett, an actor who portrays Walker and foreman Alice Kelly, has played in many roles in the various exhibits put on by the Indiana Historical Society, but now she’s part of an all-Black cast that gets to portray the life of a local icon.

“It means, for me, portraying Black excellence,” Bennett said. “It means showcasing empowered women at this time and showing some progress in what would be later known as the Civil Rights Movement.”

Bennett said this is an area of history that doesn’t get a lot of attention because the tendency is to go straight from emancipation to the heart of the Civil Rights Movement and Dr. Martin Luther King Jr. She hopes people who visit get a better understanding of who was there in between.

“There were so many people and allies alike that were working together to better things for the lives of African Americans in our country,” she said, “and this is part of that journey, Madam Walker raising up her own people and providing opportunities that just were not there.”

Most of the items and artifacts in the exhibit are from the Indiana Historical Society’s collections, but displayed in the center of the room is a Ford Model T — one of the types of cars Walker owned and drove — that the Indianapolis Motor Speedway Museum loaned, and at least one photograph is from the Indianapolis Recorder, sister publication of Indiana Minority Business Magazine.

The essence of the “You Are There” series is that visitors are stepping into a photograph. For this exhibit, it’s Walker’s office that comes to life. Everything from the floor pattern to a large safe come from photographs and other pieces of information the research team uncovered.

There are also some pieces of Walker’s life before she became a businesswoman. Visitors will get a chance to simulate using a washboard and then flexing their hand muscles to wring the garments dry, since Walker also worked as a laundress.

Danny Gonzales, exhibits researcher at the Indiana Historical Society, had two other researchers on his team. They had two photographs of Walker’s office to go by, although Gonzales noted it’s unlikely her office was as clean as it appears in those photos, so they added a little clutter to make it seem less staged.

They also had a photo of a small package of Wonderful Hair Grower, which helped heal the scalp and grow hair longer, but a packaging sticker covered some of the label. The researchers took the time to look for advertisements with wording that matched the package so they could fill in the blank and display replicas.

“If it’s wrong, it throws off the experience,” Gonzales said. “It’s tedious. It’s a lot of work. Sometimes it’s frustrating because you can’t get the answers that you want, but we feel like it’s important work.”