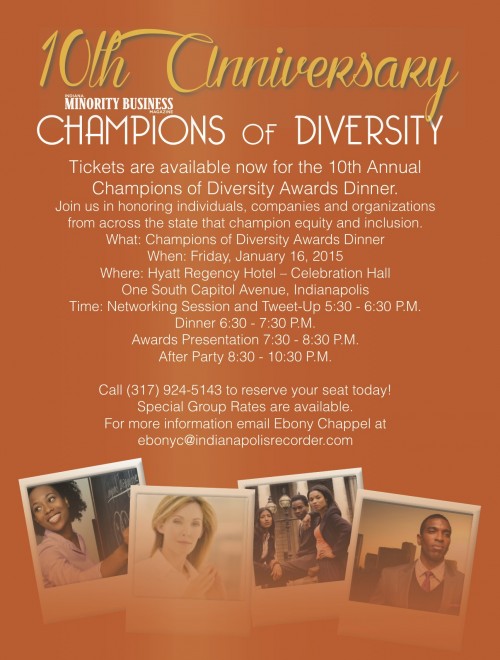 On January 16, 2015 business owners, dignitaries, and community leaders will gather to celebrate the 10th Annual Champions of Diversity Awards Dinner. The Indiana Minority Business Magazine will recognize 14 individuals, organizations, and institutions that have shown tremendous effort in the areas of diversity and inclusion.
Recipients will be honored during the annual Champions of Diversity Awards Dinner on January 16 at the Hyatt Regency Hotel in downtown Indianapolis. A networking reception begins at 5:30 p.m.; dinner will be served at 6:30 p.m. with the awards presentation immediately following. Local media personalities Amos Brown (Radio One), Aishah Hasnie (WXIN), and Rafael Sanchez (WRTV) will serve as hosts for the evening. Tickets to the 10th Annual Champions of Diversity Awards Dinner are $55 per person. The night will conclude with a free red-carpet after party featuring complimentary liquor tastings and music. The party is open to business professionals ages 21 and over.
“Honoring such a deserving class of individuals and organizations over the years has been a true pleasure,” said IMBM President Shannon Williams. “Every year I am amazed at the level of commitment to diversity and inclusion the awardees exhibit and 2015’s ceremony will be no different. I couldn’t think of a more fitting way to celebrate ten years.”
Below are the 2015 Champions of Diversity award recipients in addition to IMBM’s Rosa Parks Trailblazer Award and Dr. Martin Luther King Jr. Freedom Award recipients. The honorees of these two distinctive awards have worked exceedingly above and beyond in their professional lives and with their outreach statewide. In addition, the inaugural William G. Mays Entrepreneur Award will be distributed to John Thompson of Thompson Distribution Company. William Mays was a prominent entrepreneur and owner of the Recorder Media Group. He passed away in December of 2014.
Here is a list of the 2015 Champions of Diversity recipients:

She Has Everything (S.H.E.) helps boost local, Black-owned businesses