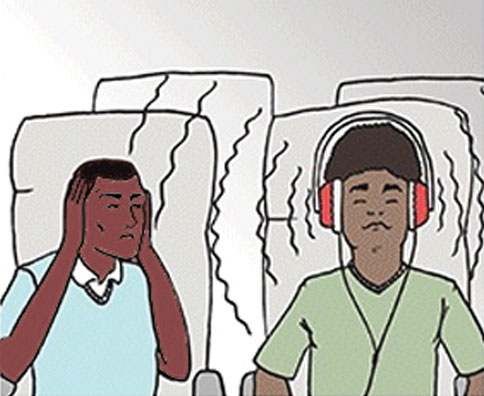 Like other means of public transportation, airplanes are a place where people of all ages, backgrounds and personalities converge in one space. The average American workplace shares very similar characteristics. Both places, have spoken and unspoken codes of conduct which at times, appear to go unnoticed by those that are oblivious or even believe they are above the law.

In late 2014, Expedia and GfK, one of the world’s largest market research agencies, released the findings from their second annual Airplane Etiquette Study. The study, which surveyed 1,000 people, ranked the most annoying on-board behaviors, some of which you may also encounter every day in the office. Read on for the top four offenders, workplace comparisons, and creative solutions.

The rear-seat kicker came in at number one on the list with 67 percent of those surveyed ranking this the worst of the worst. Depending on the proximity of your desk to others, the rear-seat kicker may be akin to the chewing gum popper, the fingertip on desk tapper, or the hummer. Expedia suggests offering candy as an incentive to stop but that may make your situation worse or even socially awkward. A nice pair of earbuds and calming music from your favorite streaming service may be the best remedy.

56 percent of respondents listed the aromatic passenger as most annoying. You may recognize this as the co-worker who wears entirely too much perfume, or the one who considers daily showering an option and not an obligation. Speaking to someone about their body odor can be quite petrifying. The best course of action here is to be discreet, tactful and delicate. There may be cultural differences or even medical issues that have contributed to this issue. Speaking with your manager or HR specialist may help ease the burden of tackling this alone.

When a tree falls in the forest, does it make a sound? Maybe. If my co-workers can’t hear my new favorite Spotify playlist at high volume is it still great? Yes. Most offices have policies on sound from electronics during work hours. If yours does not, a conversation with those in charge would be a great idea. An effectively worded email or poster in the break room stating the sound policy is a great way to inform everyone.

Distractions are inevitable. Phone calls, emails, and Facebook breaks for mental health are part of the average worker’s day and so are interactions with chatty co-workers. Catching up at the water cooler on the latest world events or business developments is normal. However, having to play nice while your office mate holds you hostage by waxes poetically on the obscure fascination of the moment during critical moments of productivity can be downright frustrating. The survey suggests warding off garrulous coworkers by switching the conversation to that big, upcoming meeting or claiming to be narcoleptic and then falling asleep. Of course, the choice is yours but a simple, “I’m really busy right now. Could we chat later?” may suffice.