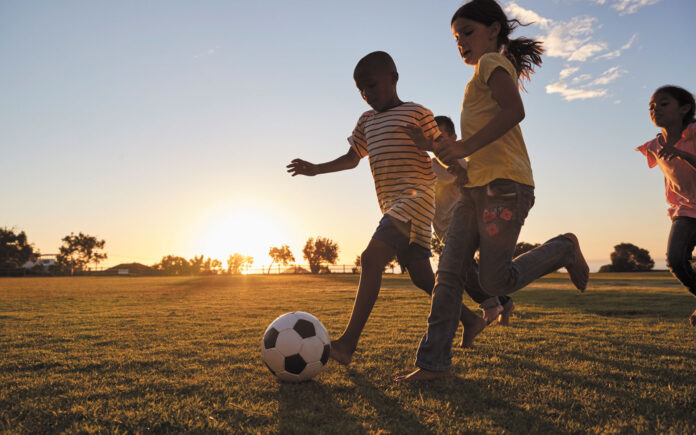 YOUTH SPORTS IS TURNING INTO A behemoth of an industry across the country, and Indiana is taking advantage of some of the lucrative opportunities that come with club teams, large tournaments and promises of better exposure to college coaches.

Youth sports has turned into an industry that, in terms of money, rivals the National Football League. Parents dump thousands of dollars into everything from travel to the special equipment their little athlete just has to have.

It’s not all good news for youth sports, though. The days of playing on the parks and recreation team and then joining the school team are becoming more and more antiquated. It seems to be the case that it’s not enough anymore to play a sport for the sake of making friends and exercising regularly. There’s more pressure on kids to get really good — good enough to catch the attention of college scouts and land a scholarship — by practicing year-round and specializing in a specific sport. It’s why many kids drop sports altogether at a younger age, a phenomenon hidden by the simultaneous rise of large tournaments that haul families from one city to the next.

WHAT YOUTH SPORTS CAN BE

Parents talk to their children about the glory days and make it seem like they were so close to playing college ball or getting a shot at the pros.

If only my right arm hadn’t given out during my senior year.

Coach didn’t play me enough because his kid was also on the team. It was all politics.

But there’s a much more real impact than (maybe delusional) nostalgia that youth sports can have. Kids learn to work together, resolve conflicts, get better through adversity, have fun and hopefully make friends along the way.

When The SportZone opened 25 years ago, Grubbs was one of 12 owners. She’s had a quarter of a century to watch youth sports evolve, especially as complexes like hers become more popular, particularly in northern states where the weather doesn’t allow for year-round outdoor sports. In the beginning, The SportZone was mostly dedicated to adult sports. Like a lot of facilities, it was popular among those who had an athletic background and were looking to stay active and continue playing the sports they love. Today, Grubbs estimates youth sports represents about 80% of The SportZone’s programming.

“I could give you a lot of different reasons for it,” she says. “They think, ‘Oh, it looks fun,’ and it’s a good business to be in, and maybe you can make a little money, and you’re doing something for the community. I don’t know all the reasons.”

The SportZone recently applied to establish a nonprofit that would allow local kids, whose families otherwise might not be able to afford it, to go to the sports complex after school and participate in camps and clinics. Not only would it provide an opportunity for regular physical activity, but those kids would also get to experience the social benefits of participating in a team sport.

Even at the enormous Grand Park Sports Campus complex in Westfield — with 31 multi-purpose fields, 26 diamonds and three indoor facilities — there’s still an emphasis on making sure the everyday kid who’s probably not getting a Division I scholarship has access to one of the premiere sports facilities in the country.

William Knox, the director at Grand Park, says the complex has been working with local parks and recreation organizations to get those kids access to the fields. Grand Park draws big-time tournaments from around the country throughout the year, but the community of Westfield put up tax money to build the complex, first conceived by Mayor Andy Cook, and deserves to use it, even if they’re not star athletes.

CAN DO FOR A CITY

A study conducted by the city found 2.5 million people visited Grand Park in 2019 and created an estimated $150 million in economic impact. The complex hosted more than 10,000 baseball and softball games; Pacers Athletic Center hosted the USA Basketball National Championships and Nike Elite Youth Basketball for boys and girls; and Pro X Foundation’s “Tailgate with the Legends” brought in $35,000 for youth training scholarships.

That’s not every event that comes to Grand Park, but it’s some of the big ones. At many other similar complexes around the country, visitors may have to stay at hotels farther away from where games are happening, but Westfield has been adding a hotel per year since 2016.

A single soccer tournament with more than 300 teams resulted in a combined 9,000 hotel room nights, according to Knox. Mayor Cook said there are some weeks when the people visiting town for their child’s tournament outnumber Westfield’s 41,000 citizens.

Grand Park will see about $7 million in revenue in 2020, according to the report, and have about $6 million in expenses, so the campus is self-sustaining.

Mayor Cook says he was passionate about starting Grand Park, which opened in 2014, in part because he saw it as a “driver of an industry.” The return has proven him and others who advocated for the complex, sometimes in the face of opposition, correct.

“Parents will spend a lot of money to involve their kids in a sport of their choosing,” Mayor Cook says, “and as we looked at the different types of sports and analyzed them, we found the sports of baseball and softball and anything that could fit onto a soccer field — soccer, lacrosse, rugby, football — were sports that, across the nation, families were spending a lot of money on. We thought, hey, let’s do this in a grand way.”

Expand this upward trend nationally, and it becomes clear how big of an impact youth sports can have on local economies — and how large the market is becoming. There are private coaches, travel costs, tournament fees and expensive equipment. It all adds up. Wintergreen Research, which tracks the growth of the industry, found youth sports is currently a $19.2 billion market in the United States. That’s more than the NFL at $15 billion. What’s more, the study predicts that market could grow to $77.6 billion by 2026, thanks to travel teams and tournaments. “There is no end to growth in sight,” the study reads.

Knox says even as other industries experience the ups and downs of the economy, youth sports — at least so far — appear to be immune, and the answer seems to be pretty simple.

“We love our children,” he says. “There aren’t many instances where parents are willing to tell their kid they won’t’ be traveling to the championship event they qualified for throughout the year.”

Knox says he’s also starting to see a difference in the way families take vacations. Whereas before families might travel to a coast and the 13-year-old baseball player brought his glove to play catch on the beach, more families are starting to package their vacations together with tournaments. The glove isn’t optional; it’s vacation equipment. Mom might catch some ‘rays and go shopping during pool play.

In Decatur County, where a youth sports complex has eight softball and baseball diamonds, Bob Barker, the parks and recreation superintendent, says participation overall is declining, but tournaments that can bring in up to 70 teams still make a positive economic impact on local businesses.

If you want to study the trend of youth sports, one way to make it look really positive is to just consider the large economic impact it has. Billions of dollars get pumped into travel and club teams as parents shell out money for flights, hotel rooms and restaurants on the road. Not to mention the fees that come with just having your child on the team, along with tournaments that charge for participation.

But if you want to consider how many children are participating in youth sports — along with what kind of child is able to play — the picture becomes more bleak.

Barker says enrollment in youth sports has been on the decline in his area. The Decatur County Youth Sports Complex, which opened in 2000, was the result of consolidating disconnected fields into a single place that turned into a sports hub where families could watch all of their kids play and kids could watch their friends. A 2006 article in the Greensburg Daily News says Decatur County “swung and hit a homer” with the $10 million complex.

But times have changed. Barker doesn’t know why enrollment is declining in Decatur County — maybe it’s video games, he says — but he’s not alone in wondering what’s going on.

There’s no doubt the culture around youth sports is changing, shifting from casual play to more intense club and travel teams, and it appears to be one of the main drivers in plummeting participation.

“You had Little League, and then you played for your school teams,” Amy LaMar, from The SportZone, says of the way youth sports used to operate. “That was kind of what was available. And now that has really opened up. For the parents that are trying to get their kids on the school teams — either in hopes of college scholarships or just good experiences — their kids are gonna have to be competitive to secure those spots. … In order to keep up with that, I feel like there’s now a bigger market.”

Each year, the Aspen Institute publishes a State of Play report that includes how much families spend on their kids’ sports ($693 per sport in 2018), how many sports kids are playing (1.87 for kids 6 to 12) and how long they stay in sports (less than three years). According to the most recent report, the average child quits sports by the time they’re 11, “usually due to lack of enjoyment.”

A 2019 study from the Sports and Fitness Industry Association found youth sports involvement is also down in Indiana. Since 2008, football was down 6.6% and wrestling was down 14%. Most surprisingly, basketball saw the biggest drop at 24%.

In Central Indiana, a study from the Sports Innovation Institute at Indiana University-Purdue University Indianapolis found parents spend a little more than $400 on extra coaching per year and about $540 on equipment and uniforms. That’s a hefty investment, and it could be turning youth sports into a high-stakes activity that puts undue stress on kids.

Health experts and those who advocate for youth sports as a positive influence are not happy with participation numbers, but it’s too simple to say everything is declining. Numbers from the Aspen Institute show poor families are dropping from sports at a quicker rate than wealthier families. From 2012 to 2018, the number of children who played a sport on a regular basis dropped by 36% for households with an income under $25,000. For children in families with a household income above $100,000, though, the decline was only 12%.

Market pressures may be driving down the number of opportunities out there for those who just want to participate in a sport for the fun of it, but as long as the low-pressure environments still exist, there are things parents and communities can do to make sure their kids actually want to play — and enjoy themselves while they do it.