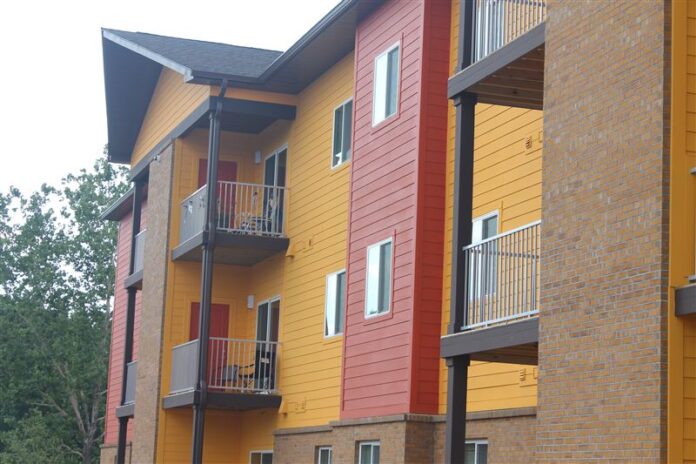 EACH MONTH, WHEN GEORGIA WILSON OPENS HER ENERGY BILLS, she’s met with a pleasant surprise: They are up to 40 percent less than they would have been in the past.

That’s because she lives at First Devington, an affordable housing complex for seniors 55 and older, equipped with about 40, 10-megawatt solar panels system that provide more than 13,000 kilowatts of power per year to its residents.

“My utilities have gone from $100 down to about $60, which is great,” said Wilson as she rocks in her large chestnut-colored recliner.
Equipped with 48 all-electric living units just off of 46th Street and Staughton Drive in Indianapolis, the three-story structure is one of a kind in the area. With six units reserved specifically for disabled seniors, the property includes an indoor aquatic exercise pool, multi-purpose community space, a walking path that surrounds the property, a gazebo overlooking the detention pond with native plants and a parking area that includes bike racks.

Along with water conservative toilets and showers, residents can enjoy LED lighting in common areas as well as through street lamps. Using the online Enphase Energy dashboard, the owner monitors the system.

Wilson, who moved in late last year, is settled into a spacious two-bedroom apartment furnished with cherry wood cabinets, Energy Star-rated appliances and enough windows to brighten areas without the use of electricity during the day.

“I’ve found my place,” said Wilson, who downsized from a house. “I love it because I have peace, and I have no bad things to say.”

Across from the street from the Staughton Senior Community, both projects were developed by Black and White Investments LLC. BWI is an Indianapolis-based MBE urban development and management company formed in 2005 by Gary Hobbs and his wife Lori.

BWI purchased the lot, which at the time contained four vacant buildings from the former Arlington Palms Apartments, for First Devington in 2011. Though the buildings could not be rehabilitated, BWI recycled and reused some materials.

“We designed the energy efficient concept early on into the project,” BWI President Gary Hobbs said. “We knew we were going to have a state-of-the-art structure.”

Hobbs said despite the extra cost for green living, the $8.4 million development has aided the residents by reducing their energy bills and led to accolades for BWI.

Earlier this year, Mayor Greg Ballard also awarded the Indianapolis Office of Sustainability Award for the property’s economic impact. As one of three companies to receive the top honor, BWI was the only minority business.

Hobbs said he thinks First Devington has helped the community become educated about energy savings. The Enphase Energy system can be used by local Arlington and John Marshall high schools for their math and science curricula.

“It helped everyone to learn about alternative energy sources. Hopefully this is something others will look into,” Hobbs said.
In July, BWI broke ground on its latest project, Penn Place Apartments, 1415 N. Pennsylvania Street, which is expected to be completed next year.