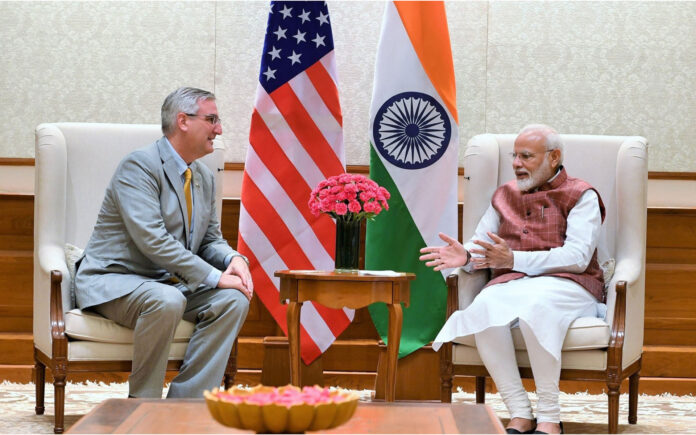 “Our state has a very internationally-focused governor and secretary of commerce who continue taking Indiana’s story around the world,” says Erin Sweitzer, director of media relations and IEDC spokesperson.

The United States is one of the world’s most premier destinations for foreign direct investment (FDI), according to the 2019 A.T. Kearney Confidence Index. The Index ranks America as the leading nation likely to receive the most FDI in the coming three years. The U.S. Bureau of Economic Analysis valued FDI stock in the U.S. at $4.34 trillion in 2018 — a $319.1 billion increase from 2017.

Since assuming office in 2017, Indiana Gov. Eric Holcomb has led 10 international economic development trips, including one to India in October.

The Hoosier state has taken notable interest in partnering with the South Asian country.

Just this past year, state officials met with India Prime Minister Narendra Modi, participated in the World Economic Forum’s India Economic Summit and cheered on the Indiana Pacers at the inaugural NBA games held in India. This is all augmenting the three existing “sister relationships” with the Indian state of Karnataka and Indian cities of Pune and Hyderbad.

Although Holcomb quips the state’s interest in India is attributed to the similarity in Indiana and India names, Sweitzer insists the positive financial advantage of collaborating with one of the world’s fastest growing economies is the more plausible reason.

“The growth that Indiana’s partnership with India has experienced over the last few years has had a significant impact on our state’s economy,” Sweitzer says.

India-based corporations such as Infosys, Wipro and Axiscades operate in Indiana, contributing to the state’s 1,031 foreign-owned businesses and together supporting 203,000 Hoosier jobs.

Strong business relations with India afford the state innumerable and unprecedented economic opportunities, says Kevin Grinegar, president and CEO of the Indiana Chamber of Commerce. He also points out that foreign investment, job creation and local commerce account for only a few of the benefits of the global relationship.

According to an April 2019 Office of the United States Trade Representative report, goods and services exported to India totaled $58.9 billion in 2018.

But Grinegar predicts that in the wake of the escalating U.S.-China trade wars, U.S. businesses — including those in Indiana — may increasingly choose India as an alternative key trading partner.

U.S. Census statistics show Indiana is home to one of largest migrant Indian populations. And the Open Doors Report on International Educational Exchange data lists Indiana as one of the top U.S.-host states for international students.

Gelhausen surmises the Indiana-India affiliation fosters a prolific exchange of cultural and educational experiences which lend to a more diverse and enlightened community of residents.

In the end, Sweitzer insists the Hoosier state has brokered an Indiana-India partnership that is leveraging global connectivity and reaping huge dividends for Indiana.