Fishers District: From dining to retail to residential living, a continuing revolution in development 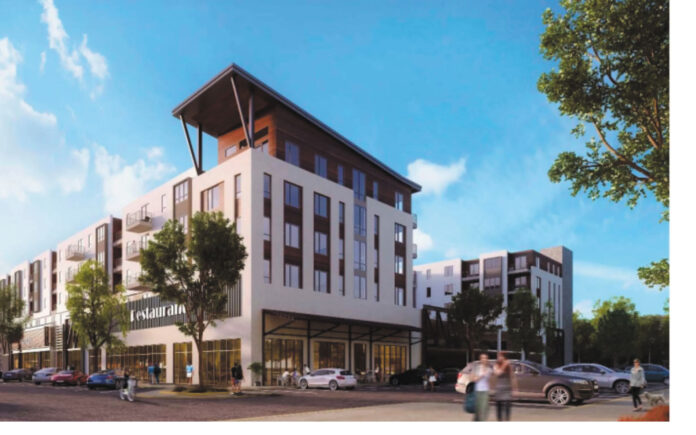 The idea of Fishers becoming an attractive destination for real estate or dining or retail would have seemed preposterous in the 1980s and 90s, when the town’s population was under 10,000 people. Just south in Indianapolis — the city that earned the nickname “Naptown,” before it was a badge of honor and commercialized — the state’s capital was just creeping up toward 750,000 souls.

Flash forward some 30 years, and it’s difficult to imagine Fishers as a place real estate and dining and retail wouldn’t thrive — all together, all in the same place. This is exactly what Fishers District is going to try to make happen when the 18-acre mixed-use development project opens this fall. Located on East 116th Street just off of I-69, the district will be a staple for Fishers and those around Indianapolis, as well as a destination for travelers passing through.

“People are embracing a more holistic approach to their day-to-day lifestyles,” says Ray Smith, vice president of leasing with Thompson Thrift Retail Group, the group developing Fishers District. “The idea of live-work-play hubs, or districts, that include strategically combined multi-family, retail, entertainment, office and restaurants is becoming the new norm.”

The district is estimated to cost $116 million. It will include 105,000 square feet of restaurant and retail space, 252 luxury apartments and a 220-room Hyatt Housel-Hyatt Place, along with a culinary accelerator and green space for community events.

Fishers Mayor Scott Fadness worked with the development team with the goal of establishing what he calls a “collective drumbeat” for the community’s culinary scene. He says serving the people of Fishers is the first priority, but Fadness envisions Fishers District being one more attraction that may draw in visitors who are in Indianapolis for a convention, for example.

The simplest way to sum up what Fishers District could mean for those who get to take full advantage of it is that it’s convenient. Omar Barham, founder of Havana Cigar Lounge, believes this will be the biggest selling point.

“It’s the reason why these concepts are popular,” he says. “Have everything within a walking distance and avoid traffic and the need to even own a car. I believe also that millennials prefer to live in bigger cities, and these concepts are basically a mini version of living in large cities.”

An opportunity for business

There are informal districts all over the place, especially in urban areas. Think of Massachusetts Avenue in Indianapolis or Jefferson Pointe — a mixed-use dining and shopping destination — in Fort Wayne. You could spend a whole day browsing in stores, eating at restaurants, finding entertainment, spending more money than you probably should. But to build a district from the ground up, thinking all the while about the best way for business and real estate and people to come together — this is an exciting prospect for business leaders.

“It’s going to give us some great exposure to folks that already live on the north side [of Indianapolis],” says Elizabeth Belange, promotions director at Sun King Brewery. “The way they’ve packaged it, it’s gonna be a great mix of urban development.”

Sun King’s space in the district may be the most unique since it will also house a culinary incubator and signature table for ticketed events, along with a brewery, of course. It’s exactly the kind of collaboration that can keep these districts churning.

Belange says, while nothing is set in stone, she can envision a scenario where Sun King offers a certain drink in combination with a menu item from the incubator. John Wechsler, who founded Launch Fishers and is heading up Fishers Test Kitchen, says there’s a good opportunity for chefs to cater events at a private event space in the upper level.

Barham says he’s “banking on” having a relationship with other businesses at Fishers District. He wants to work with Kincaid’s Meat Market, for example, by selling their meat and advertising on their menus.

The idea is simple: Starting a restaurant is expensive — about $275,000, according to a member survey from Restaurant Owner — and, of course, there isn’t a guarantee that the business will be able to survive, or even that investors will get their money back. A culinary incubator allows chefs and potential restaurant owners to see how their business may fare. Granted, Fishers District will be a prime space that’s likely to be out of reach for most starting budgets, but it’s a least a gauge of what’s out there.

Wechsler says restaurants will have anywhere from 12 to 24 months in the space. When it’s over, the goal is for that restaurant to be a viable business, whether that’s in Fishers or somewhere else. Then another budding restaurant takes its place and the whole thing starts over again.

Wechsler thinks this is an opportunity for Fishers to gain more unique restaurants and experiences for customers. And this is a low-risk way to achieve that.

“We’ve grown so fast that we don’t have those legacy restaurants,” Wechsler says of Fishers. “… What we’re doing when we say ‘de-risk’ is we can get a following with these restaurants. We’re making it a little less risky to invest that money and open a permanent restaurant.”

This process also means Fishers District has relatively low risk involvement in the deal, too. Having a space that’s constantly being replenished with new ideas and talent should keep customers coming back, if for no other reason than curiosity. And if, for whatever reason, a restaurant isn’t attracting the kind of business it needs to in order to be successful, it’s only a matter of waiting for the next one to come through.

That’s perhaps a pessimistic outlook, though, and of course those leading the incubator want to do something better than throw food at the wall and hope it sticks.

“If we build an environment that’s optimal for entrepreneurship and innovation, we’ll attract the very best,” says Jolene Ketzenberger, who does consulting work for the city of Fishers and will be part of the team that operates Fishers Test Kitchen.

Thompson Thrift Retail Group worked with Fishers Mayor Scott Fadness in the early stages of development while thinking about what Fishers District would become. The culinary incubator was an important part of that planning, according to Lori Wick, the group’s marketing manager, because both sides felt like it was in keeping with the entrepreneurial spirit of the city.

Setting up an Indiana home

Jessica Littrell and her husband founded 101 Beer Kitchen in 2012. The first location opened in Dublin, Ohio, a suburb of Dayton. Since then they’ve opened a total of three locations, all around the Columbus area. Littrell says it’s been important to expand at a slower, manageable pace, especially with four children, but they were eager to jump on board with Fishers District and expand to their neighbor state.

“When we got to hear about all the exciting things going on at Fishers District, it seemed like a really easy choice,” she says.

Littrell’s husband is from Muncie, so they were both already familiar with Central Indiana and knew Fishers would be as good a place as any to expand to while staying relatively close to Dayton. Littrell says having locations on the outskirts of Dayton has worked well so far, so they wanted to expand to another suburb.

None of the other three 101 Beer Kitchen locations are in a district like Fishers District, however, and that’s why Littrell says “we’re so excited.” Traditionally, getting in close proximity to other similar businesses would mean going to a mall, which would be anchored by a large retail store such as Macy’s or Kohl’s or Nordstrom Rack. But these malls aren’t as popular anymore, making an innovative district like the one coming to Fishers look to many like the future of crowds shopping, having fun and even living in apartments, albeit pricey ones.

Districts are trendy, but not new

What is a district? In the most general terms, it’s a place people can go to and have access to multiple businesses or spaces that meet many purposes. That means shopping, eating — even some recreation if there’s room. Sometimes it means living, too, like the 252 luxury apartments Fishers District will have. But the idea of putting a bunch of stuff in close proximity to other things and making life simpler for those who use it — this isn’t new.

You can go all the way back to medieval villages before the 10th century and see this concept, designed for times when there was no such thing as reliable transportation from home to the market and back home again. These are examples of what planners would come to call mixed-use development, or mixed-use zoning. Of course, “luxury” is relative, but it’s the idea of structuring a place — not necessarily a whole town, but at least part of that town — that has survived for a long time.

This was true in the United States for many years, too, up until the early 1900s, coinciding with the invention of the automobile. Suddenly, things didn’t have to be so close together, and a rapidly growing population could spread out over a larger area. Local governments began strictly separating various zoning designations such as residential and industrial, a practice that continued into the 1970s, when governments saw that this separation had unintended side effects, including high cost and pollution.

“While we still believe in the suburban and urban ways of life,” says Smith, from Thompson Thrift Retail Group, “these types of districts or mixed-use developments are providing an option for people looking to simplify their lives by living in areas that offer a variety of dining, shopping and entertainment options all within walking distance to where they live.”

Right on the other side of Interstate 69 are Topgolf and IKEA, which both opened in 2017 and have been fun attractions for locals and destinations for tourists. Belange, from Sun King Brewery, calls Topgolf and IKEA the “anchors” of the area for now and notes having these kind of establishments close by means Fishers District will be able to complement something that’s already there, and hopefully it works the other way, too.

“People are becoming more accustomed to these packaged districts and visiting these places,” Belange says. “There’s still that drive for the local.”

Fadness, Fishers mayor, says it’s important for any city leaders thinking about this type of project to work closely with the development team to make sure everything is done right. He says he turned down the first few ideas Thompson Thrift Retail Group came to him with. Any project of this size is a “big gamble,” he says, but there’s now the assurance that Fishers is getting something it can be proud of.