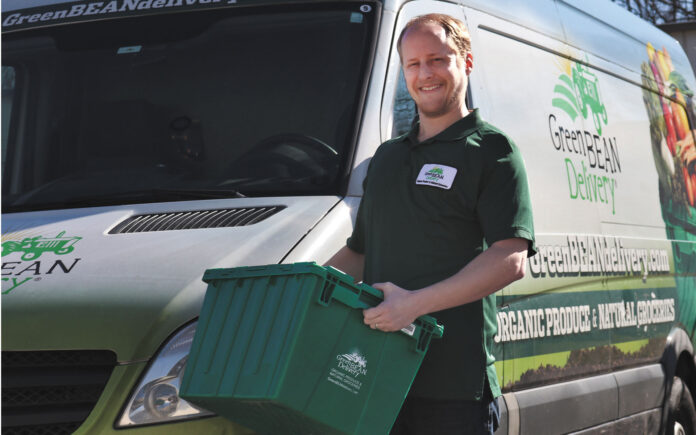 IT’S NO SECRET THAT AMERICANS LOVE FOOD. We photograph it, blog about it and even travel for it, following in Anthony Bourdain and Guy Fieri’s footsteps, but we hate battling jam-packed parking lots and long lines to shop for it. Over the past several years, Blue Apron, Plated, Dinnerly and other meal-kit companies have enabled us to skip this errand and get right to the good stuff, but retailers aren’t going down without a fight. This has made the grocery industry increasingly competitive, convenient and healthy.

To lure customers at least as far as the fire lane, many grocery stores have started allowing consumers to buy items online and pick them up from the comfort of their car. Meijer began testing this enticement at select stores in 2015. Today, curbside pickup is available at all 246 stores, including 39 in Indiana, for a $4.95 fee.

Typically, orders are ready within three hours, says Digital Shopping director Justin Sessink. “And because most Meijer stores are open 24 hours a day, those with challenging schedules or third-shift jobs have the opportunity to [pick up] orders very early in the morning or late at night.”

Alternatively, customers can have their order delivered in an hour thanks to Shipt, which sends personal shoppers to Meijer, Costco and Target, which acquired the company in 2017, to gather, bag and transport items that members paid for via the app or online. Shipt charges $99 per year or $14 per month for this membership and tacks on a $7 delivery fee for orders under $35, but orders over $35 are free.

The beauty of this service, according to The Penny Hoarder’s editorial assistant, Jessica Gray, who tried it while she was sick, lies in Shipt’s app’s messaging system, which permits shoppers to communicate with their clients.

“When she was done shopping, my shopper sent me a message to let me know she was on her way to my house,” Gray says. “This was great because it gave me time to get out of bed and put on decent clothes before she arrived.”

Shipt’s shoppers also touch base to suggest substitutions if an item is out of stock and to get feedback on produce options. But due to the way grocery stores do business, importing food from all over the world, they can’t provide as much information as Indiana-based Green BEAN Delivery, which lists an item’s origin and how it was produced.

“Since I started working for Green BEAN Delivery in 2010, the grocery industry has evolved in a big way,” says James Nimmer, director of partnerships and engagement. “I wouldn’t say that Green BEAN Delivery changed the way that grocery stores do business, but we were a pioneer in offering consumers options that weren’t yet available throughout the grocery store industry.”

Like the meal-kit companies it inspired, Green BEAN Delivery packs orders with an ice pack so customers don’t need to be home when their order arrives. But unlike the grocery stores it competes with, it doesn’t require a membership, just a minimum order of $20 in groceries per delivery. The $4.99 delivery fee decreases to $2.99 for orders over $35 and $0 for orders over $65.

Even better, Green BEAN Delivery donates one meal worth of ingredients to a local food bank, such as Second Helpings in Indianapolis, every time someone places an order, helping the community stay as healthy as its customers.