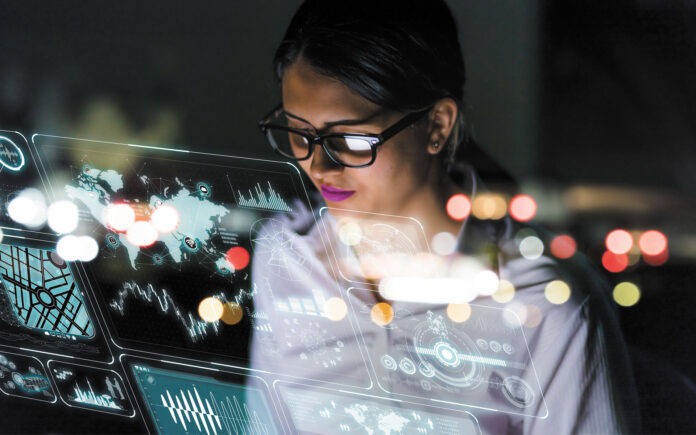 THE FIRST MODERN COMPUTER programmers in America in the 1940s were women: Jennings Bartik, Frances Elizabeth “Betty” Holberton, Frances Bilas Spence, Marlyn Wescoff Meltzer, Kathleen “Kay” McNulty Mauchly Antonelli and Ruth Lichterman Teitelbaum. While the United States government sent many of its men to Europe to fight in World War II, those six women developed computer programs. It’s a history that’s been getting more attention as American institutions and industries acknowledge the exclusion of people who aren’t white and male. When they weren’t excluded, they were largely denied the recognition they deserved until much later. In this case, the six original modern programmers weren’t widely recognized until they were in their 70s.

Today, if the stereotypical image of a tech worker that pops in your head is of a younger white man, there’s reason for that. Not only does the public get exposed to that image so often in pop culture — think about “The Social Network,” the 2010 movie about that social media company that collects and sells your data — but there’s also the fact that the tech industry is still mostly white and male.

Women made up 25% of computer jobs in 2016, according to Pew Research Center. Yes, the tech world is much larger than computer jobs, but those are some of the more visible positions when people look at tech. More broadly, women account for less than 20% of U.S. tech jobs, according to the virtual event solutions company Evia.

Audrey Taylor?, founder and CEO of netlogx in Indianapolis, is one of the tech leaders trying to take on the disparity. Taylor started the company 20 years ago with a plan to become “diverse by design.” As a consulting service, Taylor says she needs consultants who can listen to and function with diverse clients.

“We decided it made much more sense for us to focus on making a company that looked like the communities we live in,” she says, “that is intentionally looking for different people to share their ideas and thoughts. We focus on the fact that you have to be diverse by design.”

Netlogx is more than 50% female. Part of how Taylor accomplished this was by searching for talent in places that won’t just produce young white men. That includes the Indiana Latino Institute, which sends an intern to netlogx each year.

“You go find people where they are, not where you want them to be,” she says. “… What do you actually need your position to be? Some of the most talented consultants don’t have to have deep tech backgrounds. They have to have an understanding and appreciation of tech and be able to listen to people’s problems.”

When Taylor got her start in tech 25 years ago, she got used to being one of the few women in the office, but she says she hasn’t had an “oppressive experience.” She has, however, experienced discrimination, like when she learned some men were getting paid more than her.

“It still burns,” she says.

In a 2018 study conducted by Paychex, 67% of women in tech surveyed said being underestimated by peers and not being taken seriously was their top challenge. The second most-common challenge was getting overexplained responses to questions. These are two components of what’s commonly called the “boys’ club,” or sometimes the “boy culture,” that seems to dominate so many tech workplaces.

The boys’ club means staying late at work, making sexist jokes, having strong cliques in the workplace. Loosen the tie, let the hair you have left fly out of control, and extra points for using curse words in ways no one had thought of before.

It sounds familiar to the way Carrie Albright ®, director of services at Hanapin Marketing in Bloomington, describes the challenges she’s faced as a woman in tech. She says men in her industry are “very comfortable being the loudest voice in the room.” She adds that this culture creates the conditions for women to feel like they need to be the perfect candidate if they want to go for a job or promotion.

Taylor calls it a “frat house mentality” where voices and personalities and skin colors that don’t conform to a particular metric of authority are shunned or ignored. She thinks it’s getting better now, though, and that it will continue to improve as tech employers try to fill more jobs.

Albright says she’s started noticing changes, too. She’s been at Hanapin for about six years and says diversity and inclusion training, as well as a simple desire for people to better understand those who are different from them, has made a positive impact. Outside her workplace, Albright, who does a lot of traveling for her job, says she’s noticed a difference at conferences and speaking events.

A survey of tech workers by Atlassian partly supports this shift. One-third of respondents in 2018 reported having taken part in a “diversity working group,” up from 15% in 2017, and 45% said their company has some kind of formal diversity and inclusion program. It’s not all trending positive, though, as 51% said no improvement needs to be made for gender diversity, and 52% said the same for racial diversity.

Ashley Scott is a busy woman. She’s the founder and CEO of CurlyInCollege, a national network of multicultural college students with naturally curly hair; she’s the president of Ashley G. Scott Consulting, a public relations and marketing firm; and she’s the family and community engagement manager for Indianapolis Public Schools. But her problem isn’t that people look at her and wonder if she’s “trying to have it all,” as professional women, especially those with families, are often accused of. It’s that too few people in the tech world look at what she’s doing and consider it to be worthy of that tech billing.

“What’s interesting to me about the conversation around women in tech,” Scott says, “is that I have found that my business could not exist without technology, but a lot of people wouldn’t classify it as a tech company. But I really resonate and connect with the tech community. Once I got in, I was like, ‘Oh yeah, these are my people.’”

Scott sees too narrow of a definition for what’s considered to be tech work, and that ends up excluding a lot of people, especially women and others who have been traditionally excluded from tech.

“It’s like, oh, if you’re not a programmer and coded your own stuff from scratch then you can’t be a member of the tech community,” she says.

Ashley Scott ® still goes to the tech meetups and awards ceremonies — she was nominated for the Rising Entrepreneur Award at the TechPoint Mira Awards in April — but she says many women end up staying away from those events because they don’t feel welcome. This is especially true for women like Scott who work in a space — beauty is a good example — that men just aren’t familiar with.

At the Mira Awards dinner, Scott says she was sitting at her table — “I was of course the only Black person at my table” — when a white man asked what she does. She explained CurlyInCollege, which is what she was nominated for, but didn’t win. He was confused about what she meant by “natural hair,” so she explained that too.

“Oh, OK,” he told her. “My beard gets curly when it grows out long enough.”

“I just had to kind of dismiss it because I don’t have an interest in explaining my business to him,” Scott says. “At this point you’ve demonstrated that you don’t care and that you don’t understand and that you felt a little uncomfortable because you can’t relate.”

Scott, who hasn’t taken outside funding yet, says that interaction would have frustrated her when she first started CurlyInCollege in 2014, but she’s experienced enough of those by now that it doesn’t bother her much anymore. Even as Scott believes the tech industry is becoming more inclusive, she understands not everyone out there is interested in — or even knows — what she does.

Bob Baird, founder and president of Inverse-Square in Indianapolis, started his company in 2011 after a consulting firm he worked for closed abruptly. The third hire at Inverse-Square, which helps businesses solve workflow problems, was female, but she left to work remotely in Kentucky. Even with a female employee then, men dominated the culture of the workplace for a long time. At one point, Baird says he had about eight employees in the office — all men — and realized something needed to change.

“It was kind of miserable,” he says. “You don’t want eight dudes all day in the same office. Someone cracked a joke at one point in time about it being a treehouse, and I was like we have to fix this. This is crazy. You could feel the imbalance. I don’t know how else to put it.”

There’s a question people in Baird’s position need to ask themselves: Is this going to be about an “open arms” policy where the company’s leadership makes it clear that diversity is welcome in their workplace, or does it take something more intentional than that?

Baird says, at first, it was necessary to be intentional about diversity. Part of being intentional meant taking a closer look at the way they saw resumes. Baird says it’s common for people reviewing resumes to pick the one with language they’re most used to and comfortable with. In this case, a man reviewing two resumes — one written by a man and the other by a woman — is more likely to choose the man’s resume, even if the female candidate is equally or more qualified, based on the language they saw. It also meant Baird had to reevaluate the way they posted job openings.

“Let’s look at everything that predisposes this position to be one of a masculine hire and make sure that’s out of the way,” he says.

For example, not mentioning anything about a maternity leave policy — something Inverse-Square didn’t have until an employee actually needed it — probably turned away possible female applicants who otherwise would have been interested and qualified.

The first woman hired at Inverse-Square, before this shift in culture, was Ann Marie DeLaRosa, that third hire overall who now lives in Kentucky. DeLaRosa was hired in 2012 and knew Baird personally, which helped with the transition. There were still some things, though, even with just three employees, that showed her as a bit of an outsider. Profanity, for example: This is to be expected in a tech office with a bunch of guys, but DeLaRosa said she didn’t appreciate it. (To their credit, she says the others picked up on that.) DeLaRosa was also the first employee to use maternity leave, which, if Baird remembers correctly, was crafted when she was pregnant and was going to need it.

Half of Inverse-Square’s team now is female. That includes the director of sales and three project managers. Baird says there’s more “connectedness” now, which was missing when the company was mostly male, and that operations aren’t so “cold and calculated” now. There’s more empathy, he says.

“We have a much healthier perspective now,” Baird says. “You can feel more of a balance in our culture.”