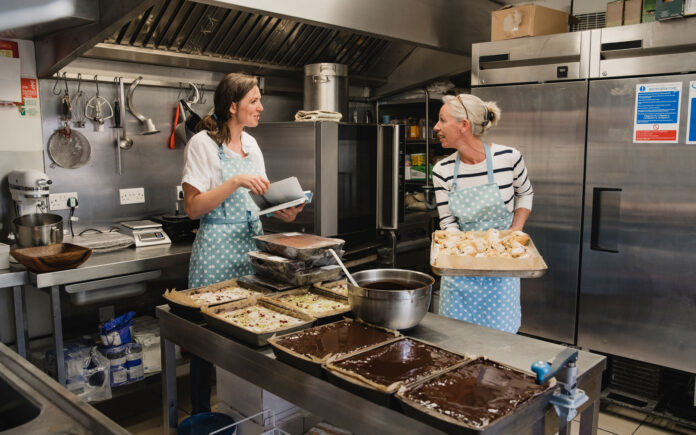 At the time, Jackson weighed 345 pounds, she was discouraged by her weight and what she had experienced. But at the beginning of 2014, she decided to shift her focus and work on herself. She began by slowly changing the way she ate and getting exercise.

The changes were difficult at first because she was embarking on a lifestyle she wasn’t used to.

“We didn’t have a lot of money growing up. We shopped at Seven Eleven (grocery store) and ate what we could to fill our bellies,” she says.

Eventually, she saw results, and her friends and family noticed too. They began asking for meal plans and advice on how to cook healthy foods. The inquiries were so overwhelming, she decided to go into business and turned to Indy’s Kitchen. That’s how Flavor by Faith was born.

Indy’s Kitchen is a 2,300 square-foot facility that is open 24 hours a day. The space includes a commercial kitchen, dining area as well as room temperature and cold storage options.

Indy’s Kitchen isn’t the only establishment in Indiana serving the community and small business owners looking to build their food organizations. Nana Clare’s in Valparaiso was created as an affordable option for entrepreneurs to test the waters before buying their own commercial kitchen.

“Food business entrepreneurs can run their business out of our kitchen, introduce their product and begin to build their brand without the financial burden,” says owner Gina Zieniewicz. “In our kitchen, they can build their business as big as they want it to be or as small as they are comfortable with. Outside of a kitchen like ours, the only option to grow your business would be to open your own brick and mortar. That’s a huge financial risk if the product has not been introduced to the public before.”

Similarly, ArtHouse in Gary is helping revitalize the city by giving entrepreneurs a place to prepare their food. Beyond the shared kitchen, the space also serves as a meeting hub for the community. With 5,000 square feet of space, the nonprofit is able to host job fairs, weddings, baby showers and even city council meetings. ArtHouse opened in 2016 as a priority of Mayor Karen Freeman Wilson. The space was made possible with the help of $1.6 million in grant funding.

The city of Gary’s Director of Commerce Karla Henderson says the financial support was an integral part in getting the location off the ground and is why they’re still able to serve the community to this day.

“Having this space in the community has been transformative,” Henderson says. “We’re downtown across from the RailCat’s Stadium, members who use our space have their own key fobs and can come and go whenever they need to. We even have a couple that produces tea in our facility and on their bottle, it says ‘Made in Gary, IN’ that’s really special to us.”