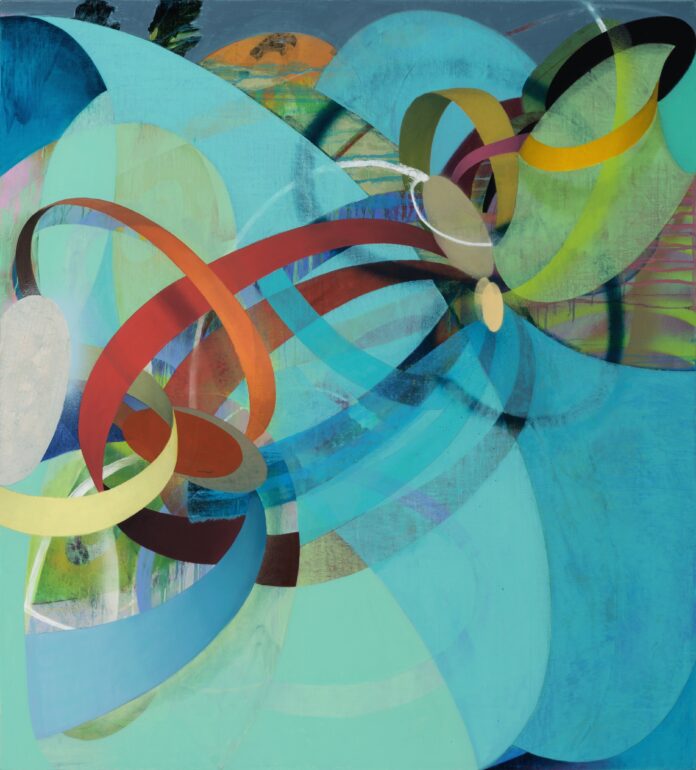 Installations brings people together and enhance a company’s image

About a decade ago, well-known Indiana artist Kanwal Prakash Singh watched as Julia Moore, then public art administrator for Indianapolis-based Blackburn Architects, flipped through 550 slides of works by artists from around the world.

Singh, a world-renowned Indiana artist in his own right, was tasked to come to a consensus with the six other judges and narrow down the field to 50 artists whose work would be installed in the new Indianapolis International Airport terminal.

“We were bringing the art from throughout the world to these major entry points to Indianapolis,” he said.
What was truly remarkable, Singh said, was that the airport and Eskenazi Health had committed to making art selection an early part of the design process for their new facilities.

“Art does not need to be an afterthought,” he said. “I thought that was a great thing to have art not as an afterthought but integrated as culture. It could be considered even before the building is completed so it’s in the right space and the right settings. I wish more corporations before they build their buildings they would consider this concept.”

Art experts agree corporations and individuals personalizing their workspaces play an important role in preserving heritage and educating the public. Though no one appears to have calculated the economic impact of art purchases by Hoosier companies, they also clearly allow some artists to earn a living when they purchase and display art.

Corporate art can be divided into several sub-types: Corporate or business space, healthcare facility, hotel, restaurants and bars, and retail. Each is characterized by elements that give those who interact in the spaces subtle cues about what kinds of facilities these are.

ART AS A BUSINESS

When Singh walks into an office building, courthouse or library in Indiana, there’s a pretty good chance one of his architectural line drawings hangs there.

Better known as “K.P. Singh,” he is one of hundreds of Indiana artists who have been able to make a living by producing and selling art to Indiana businesses.

Named a Sagamore of the Wabash, the state’s highest civilian honor, he’s not certain how often his drawings of Hoosier landmarks, such as State House, covered bridges or barns, grace the walls of corporate Indiana. But Singh estimates it’s grown into the hundreds since he became a full-time artist in the early 1970s.

“We have over the years done many, many projects for corporations,” he said.

As a member of the Sikh faith from India, Singh said the generosity of corporate America has enabled him to live the American dream and become one of the most financially successful artists in the state.

But the real secret to his success, he said, has been his ability to build relationships with potential audiences by participating in art fairs. There, people who never heard of him, come to know and appreciate his work, which often finds its way onto the walls of their offices.

Active on several boards and with myriad organizations, Singh said he’s often approached to donate a piece for silent auctions for charities. He always jumps at the opportunity, he said, because among the gift certificates, athletic memorabilia and gift baskets, his usually is the only art represented, giving him a promotional edge.

“If any of them approached us, we never said no. That was a way we could promote our art without going into a newspaper ad,” he said.

“If it’s new construction we want to understand what the vision statement is from the artists and the designers and from what the company wants to project,” she said.

Working with a consultant, Jackson said, can help businesses avoid costly mistakes. For instance, individual and collective artworks covering more than 10 percent of a wall often are restricted by building codes, she said. There also may be restrictions on materials used, such as paper or cardboard, which may require proof of flame-resistance.

“If they’re very large in scale, they often will not pass fire code inspections. Working with a professional, you won’t run into those kinds of problems,” she said.

Consultants also can help corporate clients determine whether a particular piece of art is a good value.

“We have the pulse to know how to ask why something costs a certain amount,” she said.

Though businesses have the option of buying prints, many invest in original art, Jackson said.

“We really are getting a lot of requests for original art. But it’s really more about supporting artists in the area,” she said. “There is a big difference between manufactured art and original art. I think people do recognize the difference.”

“If you’re willing to think outside the box and be original, that does say something about your business,” she said.

Though some companies buy art as an investment, more often than not, they are simply bought for decoration, image improvement or stress release, Jackson said.

“If you can see something beautiful or be inspired or have a conversation with somebody you have just given yourself an opportunity to feel better,” she said.

However, some companies, like Wells Fargo Advisors, which is expected to exhibit its collection at the Evansville Museum, do take their accumulations seriously, Jackson said.

“Some of the bigger corporations do actually hire curators to manage the investment of their works,” she said.

Though many may feel intimidated by the idea of original art, especially when it’s more modern and non-representational, Jackson said it’s her experience it starts bringing people together even as it’s being installed. During a recent three-day installation for an Evansville hospital, she said, the curiosity was immediate.

“When we started to install it, people came out of the woodwork and asked questions,” she said. “They would stop, and they’d want a progress report.”

Art in the workplace should leave staff and clients feeling positively about your business. Here are some ways to decide how to proceed.

1. Decide what you want to accomplish with art in your workspace. Do you want to encourage productivity among staff? Or do you want to send a message to clients?
2. Survey the facility to determine the best spots to situate art. Consider not only two-dimensional paintings and drawings for the walls but also the possibilities of sculptural elements.
3. Develop a budget. Decide how much you are willing to spend on art, framing and installation costs.
4. Select art that is unlikely to be considered offensive. The office isn’t the place to display a nude. Go for something neutral like a landscape or a piece of non-representational modern art.
5. Consider the nature of your business. If you work in a conservative field like law or finance, it may be best to stick to neutral themes like still lifes and neutral monochromatic colors.
6. If you can, use your walls to promote your business. It goes without saying that if you’re a photographer, you should mount your prints; if you’re in advertising, frame some of your best and brightest ads; or if you run an architectural firm, frame some blueprints.
7. Buy local. You can not only help your business but also help an artist with his or hers.

Not everyone can become a Harrison Eiteljorg, whose personal art collection became the basis of the Eiteljorg Museum of American Indians and Western Art and whose African and Oceanic collection is on permanent display at the Indianapolis Museum of Art. But here are some places to start.