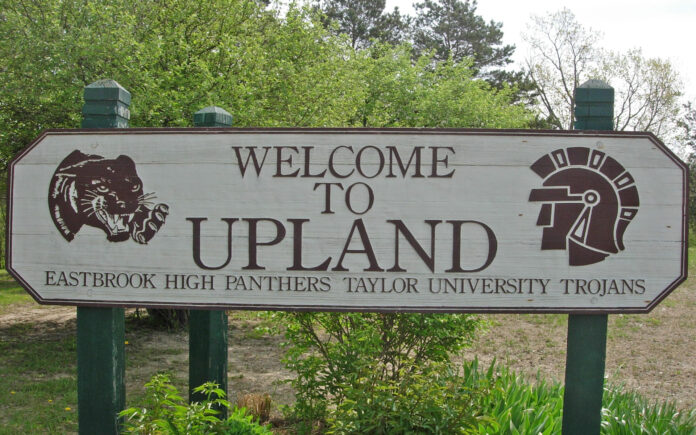 THE HOME OF TAYLOR University, Upland, a small town located in Grant County was founded when speculator John Oswalt purchased 2,240 acres in Jefferson Township in the early 1830s. Oswalt purchased the land anticipating that a canal from Indianapolis to Fort Wayne could pass through. In the 1860s, Jacob Bugher platted the town in believing there would be a railroad connecting Columbus and Chicago. The name Upland was chosen because it was considered to be the highest point on the rail line. As a gas-boom town, the prosperity Upland experienced caused the population to grow in the area. The town grew from 150 residents in 1880 to more than 1,000 in 1890.

In 1893, Taylor University, having financial difficulties at the time, moved from Fort Wayne to Upland to maintain the financial stability of the school.

The Bloom and Berries Festival occurs in June when strawberries are in season. Vendors, games and entertainment are featured throughout the day.

This Old Barn Bed and Breakfast

Keeping much of the original structure intact, Mike and Ivisa Huber worked for 15 years to transform a 100-year-old hay barn into a bed and breakfast. Situated on 150 acres, each suite is decorated with a specific theme — Country German, French Provincial, English Cottage and Spanish Retreat — and includes a private bath. The land includes two acres of stocked lakes for fishing. Other activities include hiking, walking or jogging on the trails, or riding in a canoe. Wifi is available. Children are welcome.

This Old Barn Bed and Breakfast

Choose camping with modern conveniences such as water, electricity and sewage or camp without those utilities. The campground features a fishing pond, campfire pits, firewood, bathrooms and showers. The campground holds annual holiday and music festivals. The campground is open year-round.

Situated on 11,594 acres with a 2,855 acre lake, the Salamonie Reservoir features 60 ponds, marshes and wetlands. The name comes from the Native American word “O-sah-mo-nee,” which means yellowpaint as Native Americans in the area used the bloodroot plant, which grew along the banks of the river, to make yellow paint. The reservoir has 60 ponds, marshes and wetlands. Visitors to the reservoir can participate in activities such as biking trails, canoeing, fishing, basketball, playgrounds and waterskiing.

Avid wine drinkers and amateur wine makers, Rick and Betty Jo Moulton decided to use the property they owned, which was zoned for a business to open a small one as a way to supplement their retirement. After visiting other wineries, researching how to create chemical-free wines, the husband and wife duo delved into the world of naturally made wines. Oak Hill Winery offers several dry and sweet wines as well as a port style. Free wine tastings are available during regular business hours. Free customer appreciation events are held periodically. The winery also can host private parties for 10 to 25 people.

Known for his roles in “East of Eden,” “Giant,” and his most celebrated film, “Rebel Without a Cause,” James Dean was a teen icon. However, Dean died in a car crash in 1955 just as his career was taking off. Dean was born in Marion and his family moved to Santa Monica, California, while he was a child. When he was 9 years old, Dean’s mother died from uterine cancer, and his father sent Dean to live with his aunt in Fairmount. After graduating high school, Dean went back to live in California with his father and stepmother and attended UCLA before dropping out to pursue acting. Dean is buried in Fairmount.

J. Wood Wilson built the house for his new bride, Lillian Pampel, also known as Peggy. Wilson was vice president of Marion National Bank. Samual M. Plato, a Black man and owner of a construction company, built the home for the couple. Wilson died in 1916, and Peggy moved to New York, where she met Dr. John Colin Vaughn, who became her second husband. The two actually married in the mansion, which is thought to have become their summer home. Unfortunately, the original furniture is no longer in the home, but it’s decorated with furniture from local residents. The Hostess House is open 10 a.m.-4 p.m. weekdays and serves lunch 11 a.m.-2 p.m. Renting space for events such as weddings, receptions, cocktail parties, family reunions is available.

Located in an historic building, dating back to the mid-1800s, the Charles Mill building is considered to be the oldest building in Marion. Originally known as the Marion Mill, the facility was built for flour milling. Geoff Eltzroth purchased the building in 2001 and opened the Mill restaurant, which specializes in American fare, in 2003. While Eltzroth couldn’t save much of the original structure due to years of neglect, he was able to save the floor joists and repurposed the wood as stair treads and oak paneling in the dining room. The Mill offers seafood, pasta and steaks as well as outdoor seating.

Formerly Wiley’s Drive-In, Ivanhoe’s has been owned by Ivan, Carol and Mark Slain since 1964. Although known for its 100 flavors of shakes and 100 flavors of ice cream, Ivanhoe’s is a full-service restaurant, featuring burgers, salads and an Indiana favorite, tenderloin sandwiches. Become a member of the 100 Club by trying all 100 shakes or sundaes to receive a free T-shirt and have your name added to the wall plaque in the dining room. I