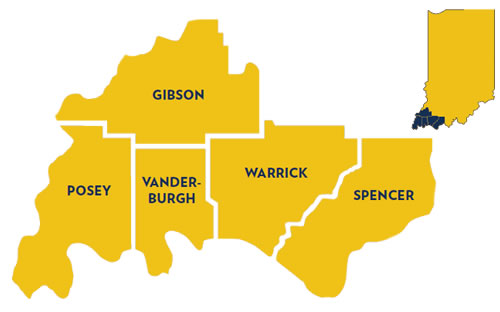 In many ways, southwestern Indiana gets a bad rap.

It’s in a different time zone from most of Indiana and traditionally has been hard to reach by highway from virtually every other part of the state.

In addition, 20 years ago Evansville was the object of extremely unfair and unjustified criticism from rock icon Madonna after filming of the movie, A League of Their Own. She reportedly told TV Guide magazine that during her three months in the city, she “may as well have been in Prague. For the first time in my life I felt very disconnected.”

But Southwest Indiana, part of a tri-state area that includes northwestern Kentucky and southeastern Illinois, has much more going for it than naysayers think.

Though the four Indiana counties—Gibson, Posey, Vanderburgh and Warrick—that make up the Evansville metropolitan region are predominately rural, the area is bustling with manufacturing might and potential. And it is the home of several top-flight universities.

As a result of all its manufacturing might, and because of the availability of trucking, rail freight service and port operations, Wathen said it probably would surprise a lot of people to know the Evansville metro area ranks 66th in the nation in the value of merchandise exported.

The automotive sector also is doing quite well in the southwest Indiana region, Wathen noted.

“It has impacted the supply chain and created a secondary uptick in other businesses,” he said.

Yet, despite a hopeful future, small business owners point out that challenges remain. Since nearly three-quarters of the employers in the area have fewer than 25 workers, access to working capital for continuing operations and for expansion remains crucial to success.

The Southwest Indiana region covers more than 1,500 square miles. Some economic development studies of the Evansville metropolitan region also include Spencer County in Indiana and Henderson County across the Ohio River in Kentucky.

Cutting across the region is Interstate 64, which reaches all the way back to Chesapeake, Va., in the east and out to Wentzville, Mo., to the west. U.S. Route 41 crosses the Ohio River and enters Evansville heading north, all the way to the Upper Peninsula of Michigan, while I-69 will one day reach from Evansville through Indianapolis, Fort Wayne and into Michigan and then up to Canada.
With a total population of 361,000, the four counties make up just under 6 percent of the state’s total population, and Evansville is the area’s largest city. Population growth in the region has remained steady but unimpressive, up 36,486 people, or 11.2 percent, since 1990, according to data posted on the economic development coalition’s website.

Among its largest industries are automotive, plastics and aluminum manufacturing.