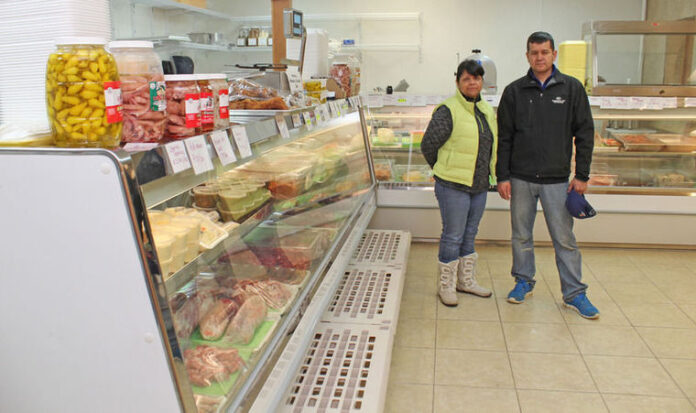 What does it take to fulfill the American Dream in a small town?

Personal attention. Focusing on a niche. Emphasizing the basics. That’s why Anna Rosa Marin, 21, says her aunt and uncle’s small grocery store is thriving in one small Indiana town despite the presence of big chain grocers Kroger and Walmart.

When her aunt and uncle, Arturo and Aracelia Marin, decided to transform the billard hall at 922 E. Lincoln Ave. in Goshen, Ind. into a grocery store, they decided to name it Eastgate Market, rather than christening it with a traditional Spanish name, Anna Rosa said.

“They chose the name Eastgate Market so that everyone would feel welcome,” she said. “Many of our customers are Hispanic, but many are English-speakers only.”

When customers step into the store, they are greeted by name, she said. “A lot of my customers are super friendly. We know their names. Maybe the prices are slightly higher than Kroger or Walmart, but we provide personal service.”

Customers will also find a wide range of Hispanic foods and cooking staples, in contrast to the more limited offerings of the majority chains, Anna Rosa said. “We try to stock the basics: vegetables, spices, beans, tortillas, candies. We also have sodas from Puerto Rico and other countries. When our customers tell us they want a certain item, we order it for them.”

Eastgate Market’s meat and deli area has fresh meats replenished at least twice a week, and the produce deliveries are also scheduled as frequently as possible.

Anna Rosa said her uncle Arturo has embraced his role as a leader in the area’s small Hispanic community. She recalls the time a local resident stopped by the store. “He had nothing, and he wanted to move back out of state,” she said. “My uncle told him where he could go for help, he helped him out, and provided him with bread and some food.”

The United States Census Bureau estimates that as of 2013, the Hispanic population of America is approximately 17.1 percent, yet in Indiana it is just 6.4 percent.

However, good service and focusing on the basics have added up to success for the Marin family, says Anna Rosa Marin.

“Most of our customers come here because we know them by name. My advice is definitely, try to remember your customers’ names,” said Anna Rosa “I think also my advice is to hire people who can speak both English and Spanish. And make sure you hire people with experience in the field. For us, we must know how to work the register, and how clean the store must be.”

The small town of Goshen is known for its train-related traffic delays, but the Marin family feels the store’s address east of the railroad tracks on Lincoln has translated into a business advantage.

Strategically, the store posted its invitation on its Facebook page in both Spanish and English.

Followed by this post: “We are celebrating our one year anniversary tomorrow Saturday December 13. Come and join us we are having free coffee, champurrado, and cake!”

Stay connected to Eastgate Market via its Facebook page: facebook.com/pages/East-Gate-Market/.