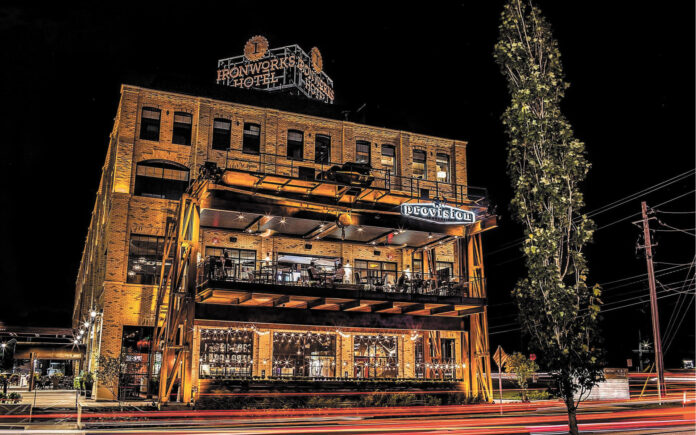 Ironworks Hotel Indy, the first boutique hotel on Indianapolis’ north side, has earned the AAA Four Diamond Rating for the first time since opening in 2017. Ironworks Hotel Indy is the eleventh in Indiana to receive the Four Diamond rating. Only six percent of hotels in the United States, Canada, Mexico and the Caribbean receive this accolade from AAA. The hotel also received the Inspector’s Best of Housekeeping Award, which recognizes rated hotels for cleanliness and condition.

“We’re thrilled to receive this renowned rating in our first eligible year since opening the hotel,” said Amy Isbell-Williams, general manager of Ironworks Hotel Indy. “This rating is a direct reflection of our staff’s unwavering commitment to providing an exceptional and memorable experience for all our guests.”

“Expanding our partnership with Aetna will bring our proven model of preventive, personalized care to Aetna’s members in Indiana and Michigan,” said Rafe Petty, division president of Oak Street Health.

Aetna, a CVS Health business serving an estimated 39 million people, joins a health care provider in Oak Street Health that has used measures such as 24-hour access to a physician and community health events to reduce Medicare hospitalizations in other Oak Street facilities by more than 40 percent.

“By working together with Oak Street Health, we will be able to collectively help deliver improved outcomes and a superior experience to our Medicare members, meeting them in their communities where many of the conversations between patients and providers occur,” said Gregg Kimmer, executive director and general manager for Aetna Great Lakes Individual Medicare Advantage plans.

give back to community

TCC, a Verizon retailer based in Carmel, announced in April its employees have provided more than 13,000 backpacks filled with school supplies to students across the state and donated more than 1,000 supply kids to Indianapolis-area nurses, teachers, veterans and animal shelters. TCC in 2013 launched Culture of Good, a company-wide movement that encourages employees to invest in their communities. TCC launched its philanthropic arm, TCC Gives, in 2016.

Cummins to expand along I-65

Cummins announced in May it plans to expand its presence along the “Cummins Corridor,” which stretches along I-65 and includes Indianapolis, Greenwood and its headquarters in Columbus. As part of the plan, Columbus will be the primary North American manufacturing center and corporate hub for the Electrified Power Business with a significant presence at the Columbus Engine Plant.

Cummins, which currently employs over 10,000 people, will have a new office building for digital and information technology employees in Greenwood, and it’s in the process of building additional space at its Distribution Business headquarters in downtown Indianapolis.

“Today is a significant milestone and a day of immense celebration as we commemorate 100 strong years of Cummins operating in the Hoosier state and look forward to 100 more,” said Gov. Holcomb. “Cummins has from their beginning been a major force to Indiana’s strong advanced manufacturing sector, and we are so grateful for their commitment to continuous education and training for employees, particularly helping prepare workers for the jobs of the future.”

Memory care centers provide 24-hour residential care to those with Alzheimer’s disease and other forms of dementia. Centers must meet state and federal standards, but these eight centers surpassed those standards.

Aurora PhotoCenter announced it will launch this summer in Indianapolis with a community workshop and exhibition by tintype artist Keliy Anderson-Staley. Aurora, founded by photographers Adam Reynolds, Craig McCormick and Mary Goodwin, will serve as a bridge between artists and the greater photographer community. Its founders hope Aurora can be a place where artists meet, share work, create and find inspiration. Aurora will spend its first year focusing on photography as a form of art and expression.

“Photography was once a medium permanently documenting history, family and places,” McCormick said. “Today it is a momentary medium ruled by innuendo. Through Aurora, we hope to explore how photography becomes art in fast and slow times.”

Indiana Humanities awarded nearly $45,000 in grants to 18 nonprofits across the state, including libraries, schools and museums. Action Grants offer up to $3,000 to support nonprofits that sponsor public humanities programs such as exhibitions, workshops and lectures. Historic Education Preservation Grants provide up to $2,500 for programs that educate citizens about historic places and the need to protect them.

“Funding a wide range of thoughtful and creative programming that connects so many Hoosiers to the depth and breadth of the humanities is core to our mission,” said Keira Amstutz, president and CEO of Indiana Humanities. “We are encouraged, every year, by the innovative programs proposed by the grantees and the opportunity to touch the lives of residents all over Indiana.”

Indiana Connected By 25 is now known as Foster Success. The nonprofit, which serves foster youth, changed its name but reaffirmed its mission to support Indiana foster youth who age out of foster care without permanent families. The organization also moved to 16 Park Community Center, 546 E. 17th Street, in Indianapolis.

“The one thing staying the same is our commitment to ensuring foster youth transitioning out of care are educated, financially stable, employed and supported,” said Brent Kent, CEO. “Our name may change, but our positive impact on those who need us will not.”

Synapse Sitters, an online network for families of children with special needs to find qualified sitters, announced in April it has expanded into Lafayette and South Ben-Mishawaka. The company was launched in April 2018 in Indianapolis. Synapse Sitters connects specialized sitters with families that have children on the Autism spectrum and those who have Down syndrome, ADHD, Asperger syndrome, sensory processing disorder, cerebral palsy or other behavioral and emotional needs.

“I started the company after I had trouble finding a qualified sitter to watch my young son with autism,” said Marie Maher, founder of Synapse Sitters. “Sitter after sitter would either turn down the job or just never come back. I knew there had to be a better way to get a break and practice self-care, while ensuring my son was safe and well-cared for. When I couldn’t find one, I created one.”

Local Initiatives Support Corporation (LISC) Indianapolis hosted its third annual Love Thy Neighbor Awards in April and gave $15,000 to projects that are developing their neighborhoods to make them more desirable places to live, work, learn and play. The award winners were: Indy Urban Acres, The Build Fund, HAND’s Home Place Gardens and Starfish Initiative. Each was awarded $2,500. Those at the event also voted for an additional project, Brookside Community Play, to receive $5,000.